SCIENTISTS fear a monster earthquake could be about to strike after a seventh quake in just 96 hours struck the Pacific region, killing hundreds of people.

‘THE BIG ONE’ to Hit the Pacific Region?

At least 272 people have been killed in Ecuador’s biggest earthquake in decades as a 7.8 magnitude quake struck off the Pacific coast on Saturday and was felt around the Andean nation of 16 million people, causing panic as far away as the highland capital Quito. 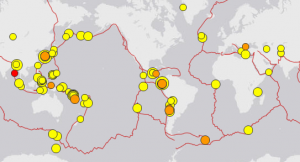 The latest quake follows devastating tremors in Japan late last week when one, measuring 7.3 on the Richter scale, injured more than 1,000 trapping people in collapsed buildings only a day after a quake killed nine people in the same region.

Around 20,000 troops have had to be deployed following the latest 7.3 earthquake at 1.25am local time on Saturday.

Roads have also been damaged and big landslides have been reported, there are also 200,000 households without power.

The death toll in the latest Kyushu earthquake is 16 people and a previous earthquake that struck the area on Thursday had killed nine people.

There have been other large earthquakes recorded in recent days, including a major one in southern Japan which destroyed buildings and left at least 45 people injured, after Myanmar was rocked on Wednesday.

Scientists say there has been an above average number of significant earthquakes across south Asia and the Pacific since the start of the year.

The increased frequency has sparked fears of a repeat of the Nepal quake of 2015, where 8,000 people died, or even worse.

Roger Bilham, seismologist of University of Colorado, said: “The current conditions might trigger at least four earthquakes greater than 8.0 in magnitude.

“And if they delay, the strain accumulated during the centuries provokes more catastrophic mega earthquakes.”