“As a Maclean’s writer bluntly noted, the $15 billion Saudi arms deal ‘is about money, jobs and bolstering Canada’s defense industry. Call it pragmatism or cynicism. Turns out those reasons are just as persuasive to Liberal governments as to Conservative ones.'”

Saudi Arms Deal is all about the Money 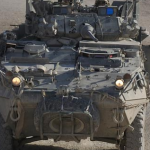 In 2014, on behalf of General Dynamics, Stephen Harper’s Government agreed to a 15 billion dollar arms deal with Saudi Arabia. A deal which would provide an economic boost to the Provinces of Ontario and Alberta where the General Dynamics Land Systems-Canada, manufacturing facilities employ 3,000 people.

Trudeau and his Liberal Government who have ignored the fact that Saudi Arabia has long been funding terrorist activities in the Middle East, has ratified the deal.

Even though the economic benefits are undeniable, 60% of Canadians are against this deal according to a recent poll by Nanos Research. It turns out Canadians have agreed it is more important to ensure arms go only to countries ‘that respect human rights’ than it is to support 3,000 jobs. In other words, Canadians want this deal stopped.

Trudeau, how can you justify this deal?

Daniel Turp a University of Montreal law professor of international and constitutional law and 17 of his students have filed a class action lawsuit against Ottawa in Quebec Superior Court against this deal. They intend on filing a similar lawsuit in Federal Court. The goal is to block the shipments of combat vehicles to Saudi Arabia.

The following article written by Joyce Nelson for Counter Punch digs deeper into the Saudi Arms deal and what Canadians should know.

“According to Canada’s military export policy, ‘a key consideration in the review of each application is the end-use of the export.’ And while the required export permits must be secured regardless of the destination, the policy specifically states that Canada ‘closely controls’ military exports to countries ‘whose governments have a persistent record of serious violations of the human rights of their citizens’.” The authors add that it is “hard to overstate the appalling human rights record of the Saudi regime.”